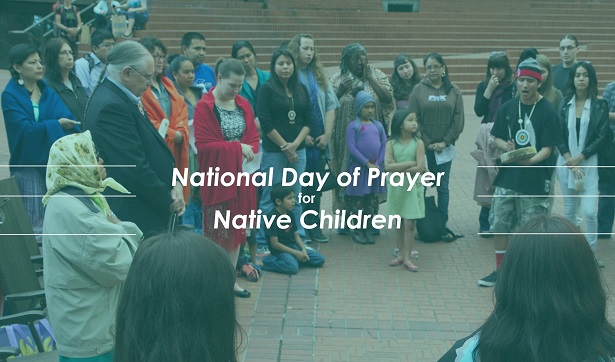 On April 4, 2017 at 10:30 in the morning, wherever you are, please pause for a few moments to focus on, reflect and pray for the health, safety, and well-being of Native children.

Your thoughts and prayers will join hundreds of others from the Indian child welfare professionals who will be gathered in prayer at the National Indian Child Welfare Association’s (NICWA) 35th Annual Protecting Our Children Conference in California. They have called upon tribal communities and their partners nationwide to join together to demonstrate their support for all Native children.

NICWA is a voice for American Indian children and families and the most comprehensive source of information on the Indian Child Welfare Act (ICWA) of 1978. The ICWA is a federal law that recognizes how crucial tribal connection is, provides extra protection for native children involved in State child welfare cases and views the tribe as that child’s third parent.

ICWA was passed in response to the high rates of native children that were being removed from their tribes and raised in non-native homes.  When this important law was passed in 1978, 25-35% of all American Indian/Alaskan Native children were removed from their homes by state child welfare and private adoption agencies. At that time, 85% of American Indian/Alaskan Native children removed were placed outside of their families and communities – even when fit and willing relatives were available.

The practice of forcibly assimilating native children into white culture has a long history in the United States. One such strategic effort was carried out through the Civilization Fund Act, which was passed in 1819 and provided resources to educate and civilize native children, leading to the creation of many boarding schools.

One of the most infamous was Carlisle Indian Industrial School in Carlisle, Pennsylvania, which operated from 1879-1918 and was created by Richard Henry Pratt, who saw it as his divine mission to forcibly remove over 10,000 native children from their homes and communities and take them hundreds and thousands of miles away.

“A great general has said that the only good Indian is a dead one, and that high sanction of his destruction has been an enormous factor in promoting Indian massacres. In a sense, I agree with the sentiment, but only in this: that all the Indian there is in the race should be dead. Kill the Indian in him, and save the man.” ~ Richard Henry Pratt

The children were forbidden to speak their language, their hair was cut, their clothes were changed, and they were abused, emotionally, sexually and physically. Some of these children died while at Carlisle, others returned home once they became adults, unable to speak their language, participate in their culture and carrying trauma from what was done to them. Records show that 57 Wabanaki children were taken to Carlisle

Later, more government sanctioned strategies to forcibly assimilate native children into white culture were carried out by child welfare agencies. Most notably was the Indian Adoption Project, which was created and funded by the Bureau of Indian Affairs and the US Children’s Bureau, administered by the Child Welfare League of America and operated between 1958 and 1967.

During this project, 395 Native American children were adopted by white families in Illinois, Indiana, New York, Massachusetts, Missouri, and other states in the East and Midwest. Approximately fifty public and private adoption agencies cooperated with the project and when it ended, the practice of removing native children continued into the 1970s with the Adoption Resource Exchange of North America, which placed an additional 255 native children.

ICWA was passed in response to these high rates of removal of native children. Compliance with ICWA has always been a challenge all across the Country. In Maine in 1999, the State Office of Child and Family Services participated in a pilot review of their child welfare program and were found to be out of compliance with ICWA. They reached out to each tribal child welfare department for help in designing and delivering a mandatory training to their 500 case workers.

From the start, this tribal-state ICWA Workgroup was committed to best child welfare practice with Wabanaki children and families and recognized the need for case workers to understand not only the letter of the law, but the spirit and intent of the law as well.  It was important for case workers to learn the history of forced assimilation of native children to understand why ICWA is so crucial and necessary.

After the initial round of training sessions in 2000, the ICWA Workgroup stayed together to continue expanding and improving training, creating sound policy and building better relationships and, in 2008 decided to establish and implement a truth commission process focused on native child welfare.

In 2012, the mandate to create the Maine Wabanaki-State Child Welfare Truth and Reconciliation Commission was signed by Maine’s Governor and Chiefs from each of the 5 Wabanaki tribes. The Commission spent 27 months researching documents and gathering statements from 160 Wabanaki and non-native Mainers impacted by child welfare and released a report of findings and recommendations in June 2015.

Soon after, in August of 2015, the ICWA Workgroup was re-established and is committed to implementation of the Commission’s child welfare recommendations. Tribal and State child welfare partners meet to strengthen policy, relationship, and resources to support compliance with ICWA. The ICWA Workgroup believes in the spirit and intent of ICWA; believes that native children have a birthright to their tribe and community; and believes that connection to tribe and community is crucial to the well-being of native children and to the continued existence of tribes.

Please keep in mind the history of forced removal of native children that led to the passage of ICWA and the present day efforts to promote compliance with ICWA during this National Day of Prayer for Native Children.