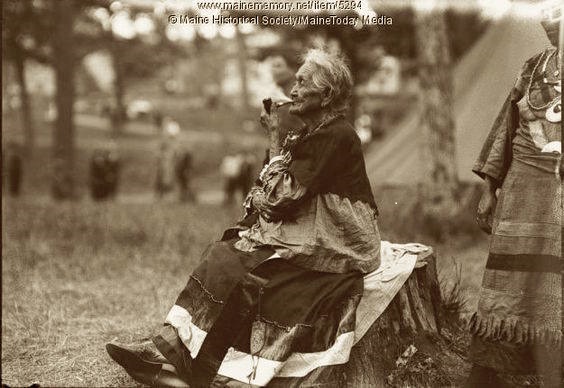 Wishing to recognize Wabanaki women during March - Women’s History month, I was stuck as to where to begin.  What could I possibly say that would suffice the honor of acknowledging the strong, brave women of Wabanaki?  I wondered what they would want me to say.  Certainly they would want to be known as the lifebearers, a sacred role of carrying and bringing forth life into physical form.

Certainly they would want their grace, humor and wit acknowledged.  One can almost imagine the sound of their laughter being carried down rivers, or wafting on a breeze carried across fields being tended together in the spirit of Corn Mother.

Surely they would want their role as culture bearers to be recognized… how they collectively cared for and taught the children the norms and ways of Wabanaki society - a society based on a foundation of peace.  Women were instrumental in maintaining a peaceful and just society.  They were well respected and appreciated by the men.  Their roles were considered egalitarian.  Equal to that of men’s roles - neither below nor above.

Historically, Wabanaki women were capable of astounding workloads.  They tended gardens, carried wood and water, crafted household utensils, gathered medicines and food, prepared and cooked meals, prepared hides, made clothes and snowshoes, set up and tore down shelters, and after engaging in all these physical tasks, women were also the primary decision makers.  Women were involved in all major decisions involving their community.  They shared the load as well as the food that was gathered or gardened.  Collectively they not only cared for, raised, and educated the children, but tended their births, too.  The same women who tended births also tended deaths.

“It is well to be good to women in the strength of our manhood because we must sit under their hands at both ends of our lives.” [Sioux Elder]

Grandmothers wisdom was highly respected and Grandmothers were responsible for selecting future leaders for their people.   In ancient stories, women played important roles for their people, such as the story of Corn Mother who sacrificed her life so that her children would not starve and at the same time, gave us the gifts of corn and tobacco.  Gluscabe, who is a cultural hero of the Wabanaki and a character in many ancient stories, is known for providing his people with guidance on how to live harmoniously together and with the land.  However it was Nokomis, his Grandmother who raised Gluscabe.  Through Grandmother’s guidance and teachings Gluscabe learned to live in balance and carried those teachings forth.  Grandmother’s teachings contained cultural values that were woven throughout Wabanaki oral history and are witnessed in the upbringing of Gluscabe.  In return, Gluscape afforded her the utmost respect.

Collectively native women were a powerful force, so powerful that earliest colonizers and missionaries acknowledged the need to break their spirits in order to seize lands ripe for the stealing and exert control of native nations. “There is nothing more real than this superiority of women.  It is of them that the nation really consists, and it is through them that the families are perpetuated… all real authority is vested in them.” [Jesuit missionary, Joseph-Francois Lafitau]

Wabanaki women, who endured centuries of unimaginable hardships and assaults on their way of being, were the backbone to their tribal nations and remain so today.  In June 2012, at a ceremony at the State House where a mandate was signed to commence Wabanaki land’s historic and precedent-setting Maine-Wabanaki Child Welfare Truth and Reconciliation Commission, Penobscot Chief Kirk Francis referenced a popular quote to comment on the state of Wabanaki tribal nations today. Francis said,  “They say that ‘a nation is not conquered until the hearts of its women are on the ground’ and then it is done, but looking around the room today at the women’s strong leadership, I’d have to say that we are in pretty good shape.” [Signing of the mandate, June 2012]

Anderson, Karen, “Chain Her by One Foot: The Subjugation of Native Women in Seventeenth-Century New France,” 1993.